The 3 Most Common Pinterest Mistakes (And How to Fix Them) 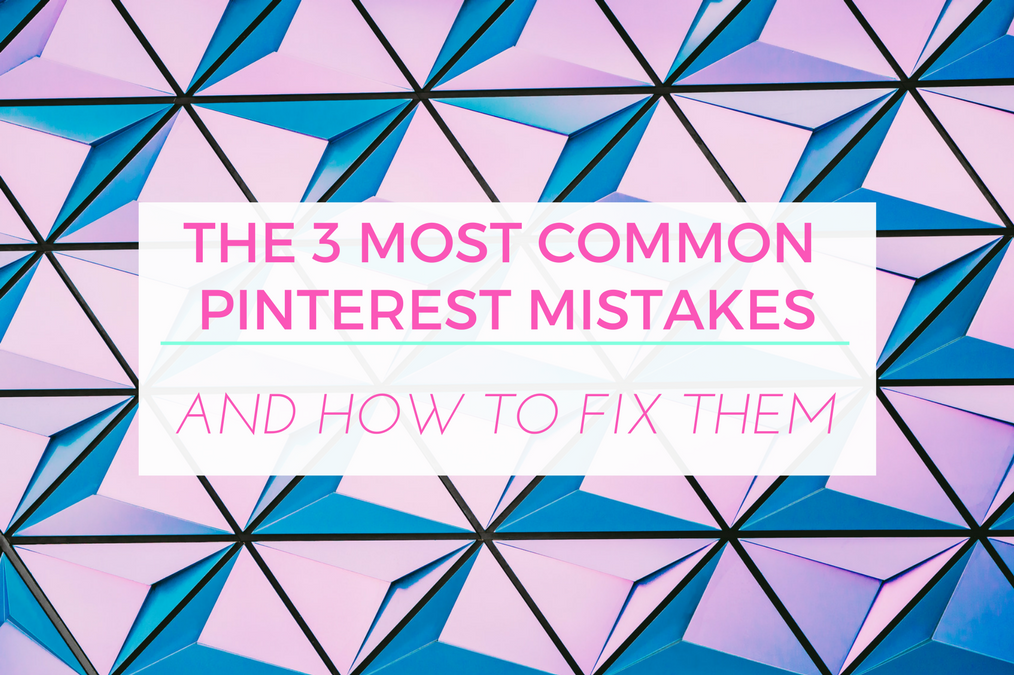 Whether you are a complete Pinterest newbie, or feel you’re more of a pinning pro, it’s likely you make a few common Pinterest mistakes. I know I still do. It’s natural, particularly as the site changes, algorithms move on, and new features are introduced. In this post I want to concentrate on helping newer pinners (although I suspect more advanced pinners may benefit too), those who are still feeling their way around Pinterest and want to understand how to use it in the best way to service their blog or their business.

These are probably the 3 most common Pinterest mistakes with ideas on how you can put them right.

Pinterest isn’t like other social media channels, in fact it’s not a social media channel at all. Pinterest is a search engine. And as such you should treat it differently, and have a very different approach to other social channels. I know when I didn’t really get Pinterest I would just sent out multiple pins from blog posts all over the place just hoping that some of them would take off. Now some of them did, but in the majority they didn’t and the reason?

Well it’s not cool to simply share your own content. Most people use Pinterest in a way to save ideas and inspirations, naturally searching and looking for answers to their problems. If you just go onto the platform and do a mass of self-promotion the algorithm isn’t going to reward you. Not in the slightest. So, it’s essential to share other pins as well as your own, in fact it makes sense to share much more of other people’s content and just slip in your own here and there.

I know it seems alien to spend all your time promoting other people’s content but think of it like this. You want Pinterest to like you. You want it to show your pins in search results. This is the way to make that happen.

This is one of the most common Pinterest mistakes, one that we’ve all made and one I see made on a daily basis. Hashtags don’t work on Pinterest, certainly not in the same way they do on Instagram or Twitter, so don’t use them. Pinterest themselves tell us not to use them, they’re seen as a feature that will devalue your pinning and only harm your efforts. You might think if you click on a hashtag on the site, that it’s working, but really it isn’t. Not properly.

The only time Pinterest says to use a hashtag, if you must, is to accent your branding. So for me, for example, I might use #lovechicliving (my blog/brand name) but that’s it. Never more than one or two in each post, and always related to your brand. I hope that clears it up.

So in mistake #1 I mentioned how Pinterest is not a social media channel but a search engine. If we absorb this fact for a moment and really appreciate what it means, you’ll realise that followers don’t matter and you don’t need to go chasing them. Don’t worry about following/unfollowing (this definitely isn’t Instagram) and worrying about following everyone that follows you; it’s just not necessary.

Let me tell you a little story to back this up:

In 2015 I became a featured pinner for Pinterest in the UK. It meant that every time someone new joined the platform they followed me. In 6 months I gained over 1 million new followers. Crazy right? Prior to the campaign, I’d been seeing really good traffic from my pins to my blog Love Chic Living and it was consistently good. Six months later, and 1 million followers more, the traffic had not changed. It was still very good, and very consistent, but the influx of new followers hadn’t changed a thing. Now some of these accounts that follow me are spam (the spam catcher deletes hundreds of them each week) but a huge percentage are real, genuine people. They don’t all see my pins though, the algorithm doesn’t work that way and hasn’t for a long time.

So don’t go chasing followers, you don’t need them to be successful on Pinterest.

Are you making these common Pinterest mistakes? Even if you are, simply change how you approach Pinterest from now on, not worrying about what you’ve done in the past and you’ll soon be back on track.